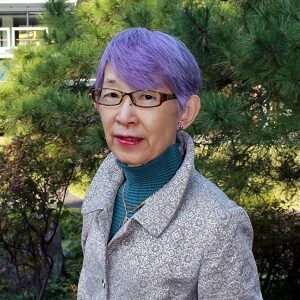 Born in Yokohama. Graduated from Waseda University in March 1967 with a BA in Russian literature. Joined Sankei Shimbun in April, working for the Yukan Fuji news department and Sankei’s foreign news department before becoming Manila correspondent from 1987 to 1988, New York bureau chief from July 1990 to February 1993, and foreign news editor. Also served as Singapore bureau chief and editorial writer from February 1996 to July 1998 and senior news writer before also being named editorial director in April 2005. Became board director and editorial director from June 2006 to June 2008 and left from Sankei in August 2012, although she continues to serve as guest editorial writer since then. Was awarded the Vaughn-Uyeda Memorial International Journalistic Prize in 1997 for her coverage of Southeast Asia. Is also a trustee of the Japan Center for International Exchange, the Nippon Foundation, and the Nakasone Peace Institute. Her many books include Akashi Yasushi Kokuren ni ikiru (Yasushi Akashi and the United Nations) (Shinchosha), Indoneshia 9.30 kudeta no nazo o toku (Solving the Mystery of Indonesia’s September 30 Coup) (Soshisha Publishing), Nihon wa ASEAN to do tsukiau ka (How Japan Should Work with ASEAN) (Soshisha Publishing), and Sengo kokusai chitsujo no owari (The End of the Postwar International Order) (Rengo Shuppan). Her latest book, published in May 2021, is Edo no janarisuto Katsushika Hokusai (HOKUSAI, Journalist of the Edo Period) (Kokudosha).